Indoors or outside, the weather was great this past Saturday, June 8 for Connecticut residents to check out our state’s annual Open House Day. With more than 100 attractions statewide participating, I decided to stick around Fairfield County to get reacquainted with two museums that I last saw as a child. Plus, one has a new neighbor that is worth climbing around. 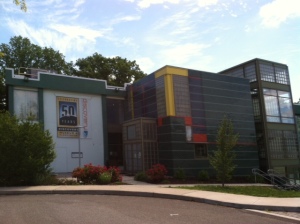 irst, I headed out to The Discovery Museum and Planetarium on Bridgeport’s Park Avenue, near the city’s border with Fairfield. A mainstay since I can remember, the three-level museum pays tribute to milestones in science, innovation, and exploration. On the main level, the museum’s “Adventure Science” section starts with a jungle gym set up that provides a miniature version of the Adventure Park located next door. Younger visitors didn’t hesitant to try it out, climbing, jumping and running around the structure.

Moving on across the wing, the next space shows how Bridgeport and other places in Connecticut made major strides in engineering such as Sikorsky Aircraft in Stratford, whose founder Igor Sikorsky is credited with launching the U.S. helicopter.

Speaking of outer space, the lower level holds the museum’s Planetarium and a Challenger Learning Center, along with AV displays about the planets and enlarged photos of the  cosmos. Here youngsters can also go exploring with MoonBase Discovery, a section with shuttles for climbing inside and getting behind the wheel. Don’t forget to head up to the third floor for more hands-on activity with a mixture of exhibits highlighting energy in all its various forms. 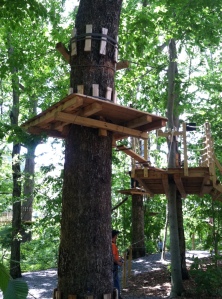 Going back outside, my next stop was at The Adventure Park at The Discovery Museum, which is behind the museum’s property. Opened two years ago, the aerial attraction sits on five acres of woods in Veterans Memorial Park, with 11 different course levels that encourage you to climb, crawl, pull through and step across one platform to the next and reach the end point by zip lining.

Choose to stick in your comfort zone, starting with a new purple line, or perhaps challenge yourself to reach a level like the double black diamond (60 feet up). Go at your own place. Other things help put fears aside. The park’s crew members suit you up in a fitted harness and gloves and give clear instructions about the magnetic clips you’re given to get to each point.

And you’re not left hanging mid-course. Call for help by saying “staff,” which I did, and they will come. I finished with a needed upper body workout and a confidence boost.

Finishing out the day, I drove up to Stamford for a quick jaunt around the Stamford Museum & Nature Center, which is close to the Merritt 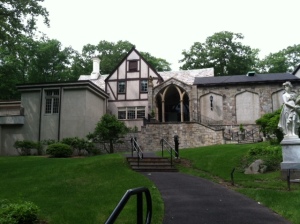 Parkway. The 118-acre property has a nice mix of family activities: hiking trails, a working farm, a children’s playground, nature center, a nature preserve, and an observatory. Heckscher Farm is home to goats, sheep, pigs and chickens, with an organic vegetable garden and an animal embassy. Step inside Bendel Mansion and Museum Galleries to see the former summer home of New York designer and department store owner Henri Willis Bendel.

Even if Connecticut Open House Day is now closed, get out and see these places!