Last month, I headed to Eastern Europe, with J, my cousin and co-traveler to many places in Europe. For our 2012 meetup, we decided on a 10-day jaunt to Prague, Vienna and Krakow. It was nice to see Eastern Europe, a contrast to the glitz of its Western counterpart.

Each city maintains visual reminders of multifaceted histories: beginning with a royalty-led past up through two World Wars and followed by post-Communist era. Each city has its unique tale. First, I’ll start with Prague.

Like many European cities, Prague is best explored on foot. Much of this Czech city’s center has been declared as a UNESCO World Heritage site and many buildings from the 13th through 18th centuries preserve Prague’s rich legacy. Before you come here, get your best pair of comfortable shoes ready (think flat) and read up on this guide to walking around areas worth seeing. 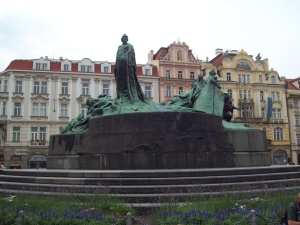 Don’t worry if you happen to get lost while wandering around Old Town (we almost did). Old Town has winding alleys and cobblestone streets, and one landmark that lets you know you’re in the right place is the Old Town Powder Tower. Built as one of the walled city’s major gateways, the Powder Tower (once used to store gun powder) also marks the way the beginning of the ceremonial route that soon-to-be Bohemian kings would venture down their way toward Prague Castle.

Relax. Your path will eventually lead to Old Town Square, a colorful center location buzzing with shops, restaurants, cafes, and landmarks during the day and evening. The square’s key attraction is the Astronomical Clock gracing the Old Town Hall. On the top of each approaching hour, from 8 a.m. to 8 p.m., crowds gather in front of the 400-year-old clock to watch as two doors open to unveil a procession of rotating figurines.

If you would like to have a less-crowded look at the square, go up inside the building’s tower to reach the top for panoramic views of the city. There are two choices for going up: by elevator or stairs. With the latter, make sure you’re prepared for serious steep climbing. Purchase tickets for entry. Near the National Theater, find the Národní Memorial, a bronze plague graced with hands in a peace sign. It’s located on Národní Street No 16, marking the place where riot police beat college students holding a peaceful protest on a cold night in November 17, 1989. 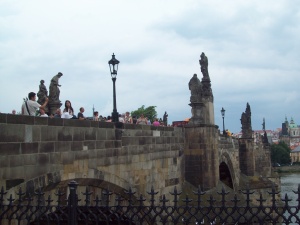 picturing taking and posing, and people watching, near the about 40 statues gracing this 650-year-old promenade along the Vltava River. These statues represent various Catholic saints and martyrs placed here as a way to convert locals to Christianity.

Walk alongside fellow tourists, vendors and street performers and artists here. If you happen to notice various colored locks fastened to the bridge’s rails or even on statues, you’re seeing love notes.

Couples who want to symbolize their love will jointly place a lock upon this bridge, then throwing the key into the water. You may spot locks on other bridges around the city as well.
Charles Bridge does get crowded during the day, but you can get a different perspective at night. The other end of Charles Bridge leads you to Mala Strana (Lesser Town), a Baroque section of Prague originally settled by German merchants.

Malá Strana (Lesser Town)
Malá Strana has been a home for diplomats, merchants and those who served at Prague Castle. Red roof houses and prominent churches are found here. Serious shoppers can journey up Nerudova, a steep alley lined with stores from Lesser Town Square up to Prague Castle. For another look at lavish living, go by Wallenstein Palace, built by a duke in the mid-1600s. It’s now being used by the Czech Senate. 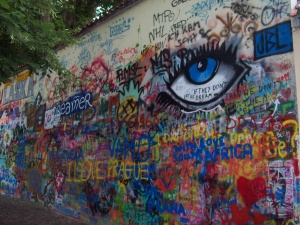 Situated in Kampa Neighborhood, John Lennon Wall, also known as Lennon Wall, is a colorful permanent fixture since the 1980s. This space has been decorated with peace-minded graffiti inspired by John Lennon and lyrics from Beatles songs.

Around 1988, the wall became a source of contention for the then-Communist regime. Students would write on their grievances over, and have clashes with, political leaders of that era.

When authorities would order for the wall to be repainted, it would almost shortly be graced with poems and pictures shortly after. The story goes neighboring French embassy asked officials to leave the wall alone, and this request still has been respected.

Hradčany (Castle District)
Whether you prefer to take Tram 22 or hike up this hilltop complex, Hradčany’s Prague Castle has remained the seat of power, first with the Czech royal family and now its government, and also religiously, since the ninth century. An hourly changing of the guard ceremony at the front gates occurs. A more formal presentation happens daily at noon inside the castle’s first courtyard.

Top sights include St. Vitus Cathedral, built in various phases starting in 1334; the Old Royal Palace, which is still used for special state occasions; the Powder Tower; the European masters branch of the National Gallery; and Golden Lane and Daliborka Tower, a street lane with tiny houses built into the castle fortifications.

There is no cost to enter and explore the courtyard of this complex, but paid admission is required for entry. On your way out, choose to walk back down the hill through Nerudova or venture through the Petrin Hill gardens.

Emerging over Lesser Town and across from Prague Castle, the park Petrin Hill has gardens and orchards and manmade attractions such as Petrin Tower, a miniature replica of the Eiffel Tower. Climb up the 194-foot tower to reach the top for another striking view of the city’s landscape. To venture up Petrin Hill, buy a ticket for a ride on the funicular.

Josefov (Jewish Quarter)
Within Josefov, this former Jewish ghetto once served as a thriving community for Jewish citizens for about five

centuries until city authorities cleared the area to make way for luxury buildings. The Jewish Museum symbolizes the heritage of residents not as a single building, but a collection of four preserved synagogues, a ceremonial hall, and a historic cemetery.

Each synagogue holds different exhibits on Jewish customs and history. Tickets are required for entry into each site, with Old-New Synagogue requiring a separate ticket. The Old-New Synagogue is Europe’s oldest remaining house of Jewish worship. The Old Jewish Cemetery is one of the world’s most crowded. One block area holds many graves, with tombstones literally positioned on top of each other.

Between the Jewish Quarter and Old Town, Jan Palach Square is named for a 21- year-old college student who set himself on fire to protest the Soviet invasion in the late 1960s. Crowds gathered there for his funeral. Today, there is a memorial to him here.

New Town (Nové Město)
Established as a municipal development and founded by Charles IV in the 14th century, today’s New Town is a haven for hotels, restaurants and clothing stores. The historic, half-mile Wenceslas Square is Prague’s commercial focal point. Formerly a horse market, the square was site of significant moments during the Velvet Revolution in 1989, with organized mass demonstrations taking place.

Also in this neighborhood, Charles Square, once a cattle market, nowadays serves as both a park surrounded by buildings and a transport hub intersected with tramlines.

So, when in Prague, get walking!