Ever been to Prague? It’s most likely the first thing about the Czech Republic that comes to mind. Yet as this city is definitely a must-see destination, Czech Tourism officials wants to make sure potential visitors know that there is plenty to explore in this Eastern European country.

Last Thursday night, Czech Tourism North America and Prague City Tourism co-hosted a reception to unveil the launch of a re-branding campaign called “Land of Stories,” which promotes Czech Republic’s heritage and offerings. The campaign is shaped to encourage travelers and tourists to create their own stories from their experiences they have there.

Back in New York City’s Greenwich Village, at the Czech-inspired Doma na rohu restaurant, board representatives greeted us with appetizers and a wine tasting by Vino z Czech of brands from Moravia, a wine-growing region. 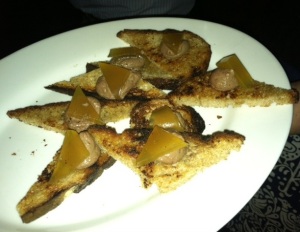 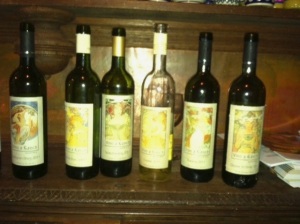 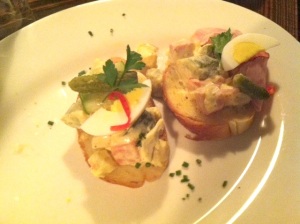 While Prague is a top reason to visit the Czech Republic, as I did in 2012, Czech Tourism also is promoting other equally appealing attractions. Here are the campaign’s key themes:

Admirers of modern marvels should check out Cubist architecture found in The House at the Black Madonna, Trade Fair Palace and Muller House. Significant buildings also extend to historic houses of worship. Prague has a strong Jewish heritage, with a number of synagogues, a unique cemetery, and folkloric legends like the figure Golem in its Jewish Quarter, a former ghetto called Josefov.

In the Southwestern part of the Czech Republic, this region is famous for its wine, and also contains Palava, a nature reserve, and Lednice-Vaitice region, a cultural landscape of Baroque estates that has also been declared as a UNESCO World Heritage Site.

Of course, the Czech Republic is known for beer, and Pizen is touted as the capital of beer culture. I also learned that there is a Chodovar Beer Spa that centers on “beer wellness.” (Mental note: Look into making an appointment.)

Another UNESCO World Heritage site, this town is famous for its historic castle and is home to the oldest Baroque theater in Europe.

As the concept of medical tourism (going outside your home country for medical treatments, often at a lower cost) has been gaining more press, Czech Tourism is pitching Czech Republic’s emergence as a European destination to obtain affordable yet still topnotch medicine. One suggested place to perhaps head to is Karlovy Vary, a “spa town” in western Bohemia.

Although Toronto has been getting attention from a completely different matter, Canada’s largest city has new and long-time attractions that make this destination great for exploring. Last Tuesday, Tourism Toronto came to Manhattan’s Midtown district to host a special dinner at Rustico Cooking to celebrate a newcomer to the city. A restaurant. 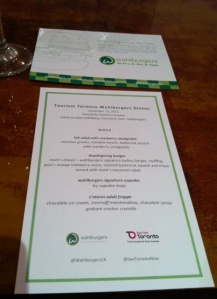 In early 2014, Wahlburgers Canada will open inside the SoHo Metropolitan Hotel on Blue Jays Way in Toronto’s entertainment district. Yes, for those of you are pop culture savvy, NKOTB performer turned actor Donnie Wahlberg and his fellow acting brother Mark Wahlberg have family ties to this establishment. Their brother, Paul, is the restaurant’s executive chef.

Already having a location in their home state of Massachusetts, Wahlburgers’ menu was designed to bridge the family’s  memories with their fondness for comfort food. Meal options include takes on traditional American dishes such as the patty melt and macaroni salad (taken from their mother’s recipe) to more customary choices based on what the Wahlberg brothers like to eat.

So why choose a Canadian location? Here’s the reason: work schedules. The brothers have often spent much time in Toronto due to movie shoots, and got to know the city’s culinary scene. 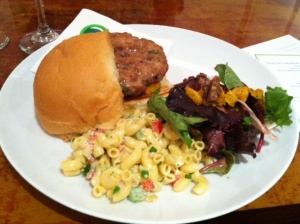 For our dinner, Paul presented a Thanksgiving-themed menu. Our main dish was Mark’s Choice, a signature turkey burger packed with roasted butternut squash, an orange and cranberry sauce, stovetop stuffing and mayo on a potato bun. The burger was paired with the restaurant’s macaroni salad along with a fall salad with cranberry vinaigrette made with mesclun greens, romaine hearts and butternut squash. 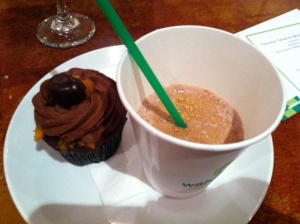 With dessert, a signature chocolate cupcake by Cupcake Mojo had an extra bite to it with the added ingredient of Sriracha, a hot sauce. And an adult frappe was all about S’mores, thanks to chocolate ice cream, Smirnoff marshmallow, chocolate syrup and graham cracker crumble.

Food aside, Toronto offers a mixture of historical, cultural, and family-friendly offerings. The city recently welcomed in a Ripley’s Aquarium, and still has long-time favorites such as the Ontario Science Centre, Toronto Zoo, the CN Tower, and Canada’s Wonderful Land. NHL fans must make a visit to the Hockey Fall of Fame and winter sports fans should also head to Toronto Ski and Snowboard Centres. With the arts, The Art Gallery of Ontario is presenting “David Bowie Is,” a collection of more than 300 objects from the performer’s personal archives now through November 27.

And with the holiday season pretty much here, Toronto Tourism’s website seetorontonow.com is serving as a one-stop shop for booking hotel reservations to enjoy this festive time in the city.  More information on events like Lowe’s Toronto Christmas Market (November 29-December 15) and Cavalcade of Lights (November 30) is available on the site as well.

I think walking tours are one of the best methods for exploring a major city’s districts. And New York City has its share of historic ones. On Sunday morning, I grabbed a last-minute spot on a Meetup event for a history walking tour around Central Park.

Officially opened in 1873, this 843-acre public park stretches from 59th Street to 110th Street, from East Side with Fifth Avenue all the way to Central Park West. Each year, 38 million visitors are said to come to this National Historic Landmark. As great to explore the park on your own, I also recommend signing up for a guided walk if you want to get more insights about the park’s various sections.

Starting from Sheep Meadow, heading west and eventually making our way to The Great Lawn, here is a pictorial view of sites on our walking route worth your time to stop at. 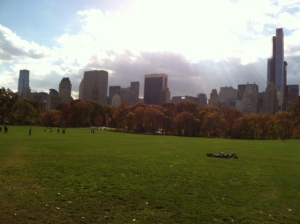 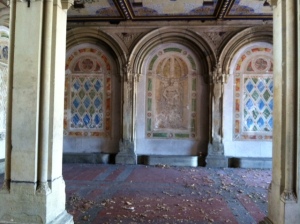 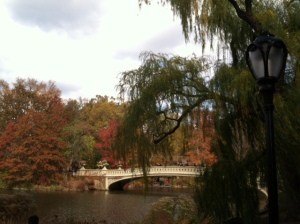 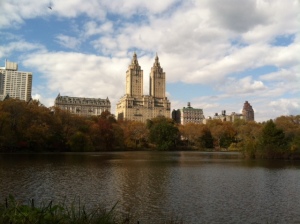 Waterview, with The Dakota second from left 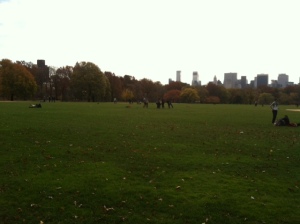 When I talk to other people about my travels, sometimes I get the question, “Is there any place you think you would go back to?” Without a doubt, one place that automatically comes to mind is England. Particularly, I would head to London.

I went to London almost a decade ago – wow, now a decade ago – with my cousin and split about a week’s time in the city and then out to Oxford, Windsor, Stratford upon Avon and Burford. But, like many destinations, London can take up a whole week stay or even more than week to catch as many as attractions in and outside of this major city as I could.

This time around, if I could back go to see London, there are a few things I would want to do differently. One of them is to stay in a place other than a hotel.

Through fellow travelers, I have heard about GoWithOh, an apartment rental service with more than 2,000 accommodations in 17 major European cities. Locations include Rome, Berlin, Paris, Barcelona, Dublin, Florence, Madrid, Vienna, and Prague. And London, of course. Recent additions to this list are Pisa, Amsterdam, Edinburgh, Nice, and Milan.

Browsing through GoWithOh’s listings in London, I came across this lovely two-bedroom apartment — or perhaps I say flat — in Waterloo. Based in Central London, located on the Sound Bank, this flat is described as being just a 10-minute walk from Big Ben, Parliament and Westminster Abbey. As I like to walk, this option is great! 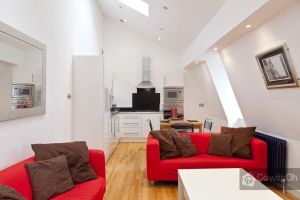 Also, if I was to stay here, I would want to take my younger sister with me because I think she would like London as much as I did. In addition to its location, another reason for going with this two bedroom flat was that after a long day of exploring London, we would probably like some alone time. And being able to unwind and get good night’s sleep after a fun and long day out will help keep our time together balanced. 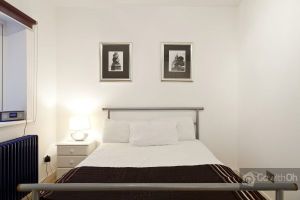 In addition to two bedrooms, the layout for this flat is pretty cool. The living room appears to be spacious, and the open-plan kitchen has everything we would need for storing groceries or takeaways (British speak for takeout) and handling a laundry emergency. There is also a good-sized dinner table and a full-bath, which will help my sis and I feel like we are at home. Free Wi-Fi is also a bonus, since we would otherwise have to find, and most likely pay for it, in public places.

Regularly GoWithOh holds a guest tester competition that invites travel writers, bloggers and vloggers (video bloggers) to submit entries for a chance at staying in a GoWithOh apartment of their choosing. So, this post is my submission. Let me stop here before I get further carried away over this dream flat. I definitely would want to give GoWithOh a try. As a GoWithOh guest tester, or even as a paying guest. Sister included.