What’s Your Pick: Boston or Philadelphia?

While the distance between of Boston and Philadelphia are located about a three-hour drive or six-hour Amtrak trek apart, these major cities have one big thing in common. They’re sources of history. And the modern day scene in these respective cities is thriving too. Here’s what to see in each state.

Boston has many trails and locations connecting you to key figures linked to Beantown or in particular the start of the American Revolution.

Walk along the Freedom Trail, a self-guided, 2.5-route that will bring you past 16 historic sites. Pass by Boston Common, also known as America’s oldest park; The Paul Revere House – where the famous nightrider lived during the time of his legendary ride, to its end point, The Bunker Hill Monument, honoring soldiers in one of the earliest battles in the American Revolutionary War. The African American Trail will bring to you stops such as the Robert Gould Shaw and the 54 th Regiment Memorial, which commemorates the regiment that was made famous in the film, “Glory.”

In comparison, Philadelphia clearly has a stronghold on U.S. history – for starters, the Liberty Bell at the Liberty Bell Center. In April 2017, the Museum of the American Revolution opened its doors, to tell the story of why our nation went to being a British colony to a new country in a different light. It goes beyond the usual key players by highlighting other figures such as freed and enslaved blacks, native peoples, and women. Then there’s Independence Hall, where our Founding Fathers signed the Declaration of Independence and later on delegates would work on our Constitution. Also, did you know that the first “White House” – as in one before the famous home in D.C. – was in Philadelphia. Called The President’s House, this venue is now an open-air museum where the first Executive Mansion in which Presidents Washington and John Adams stayed.

Being Artsy and Scientific

The arts and sciences have their place in Boston and Philly. In Boston, you can spend a whole day at the Museum of Fine Arts. Its three levels house everything from Egyptian artifacts to Contemporary American art, with pieces from every corner of the globe. A short walk away, Isabella Stewart Gardner Museum reflects the look of a Venetian palace with a beautiful courtyard along with a collection owned by its namesake, a major collector and philanthropist. The John F. Kennedy Presidential Library and Museum honors the legacy of our country’s 35th Commander in Chief. The Mary Baker Eddy Library contains the Mapparium, a three-story, stained glass globe that can be walked through, and the Museum of Science will teach you a thing or two with planetarium shows and live exhibits and experiences like its butterfly garden. 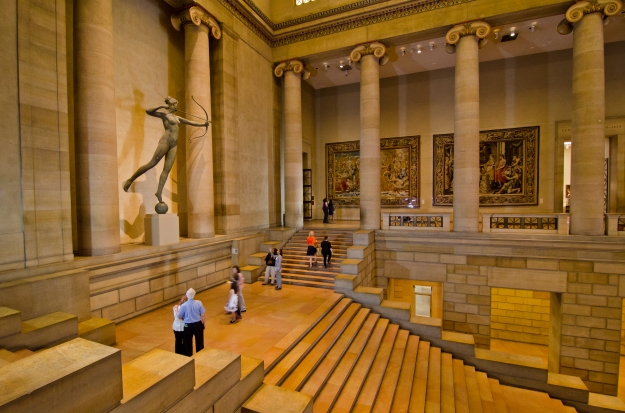 Philadelphia Museum of Art / Photo by B. Krist for Visit Philadelphia

Philly can boast having the oldest museum in the country – the Pennsylvania Academy of Fine Arts. It’s got some other fine ones too. Climbing up “The Rocky Steps” to the east entrance of the Philadelphia Museum of Art feels like a workout, but you’ll encounter the statue of Philly icon, Rocky Balboa. Inside the museum, discover artistic and architectural finds from all over the world, with an over 240,000-piece collection!

The Rodin Museum has the most pieces by this sculptor outside of Paris and Philadelphia’s Magic Gardens is a fun folk art/gallery space that’s covered in mosaics. If seeking science, The Franklin Institute is an educationally entertaining museum and research center with an IMAX theater and planetarium, while the Mütter Museum focuses on medical abnormalities with displays that might make you a bit squeamish.

Getting hungry? Both Boston and Philly can fill you up at markets or in eateries. An indoor enclave, Boston Public Market sells New England sourced bounty from farmers, fishers, and food product vendors, or features demos and classes at The Kitchen, the market’s programming center. Inside this historic meeting hall, Faneuil Hall Marketplace is now more a mall setup with food stands and restaurants offering staples like pizza, ice cream and chowda. On Fridays and Saturdays, the outdoor Haymarket at Congress and Hanover streets sells fruits and veggies. Boston’s North End is its Little Italy, with pizzerias, cafes and ristorantes such as Giacomo’s Restaurant. As for other restaurants, a hot seafood spot is Neptune Oyster, being well-noted for its raw bar and lobster rolls, or Atlantic Fish Company, a Boston surf and turf institution. 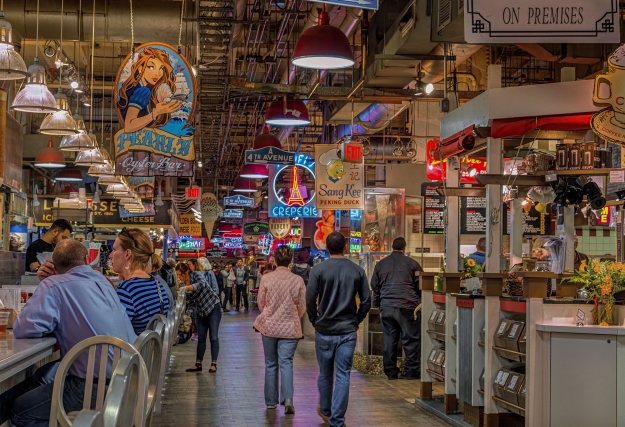 As one of Philly’s major culinary attractions, the Reading Terminal Market is an interior food hall with a cornucopia of Amish specialties, seafood and produce stands, cookware stores, and bakeries and restaurants. Of course, you have to try a Philly cheesesteak, but note there are more places to choose from than the noted rivalry between Pat’s King of Steaks and Geno’s Steaks. McNally’s puts theirs on a Kaiser roll, and Jimmy Fallon was seen digging Dalessandro’s Steaks. Have a hoagie at shops ranging from a tofu type at Fu Wah to the hearty stuffed at Cosmi’s Deli. Explore Chinatown and perhaps go for a late night meal at David’s Mai Lai Wah for their noodles and dumplings.

Get started on planning your visit by looking at these Trip.com recommended hotels in Boston or Philly.  Tell me which historic city would you head to first.

This post is part of Trip.com’s Underdog City campaign.

Last week, Philadelphia welcomed in a new museum that’s really fitting for its location in Old City district – the Museum of the American Revolution. For work, I got to see a pre-opening preview of the museum and spent some time revisiting locations significant to our nation’s founding.

During our country’s Colonial days, Philadelphia was a big deal. In what’s now the Historic District, which Old City belongs to, there are buildings still standing from that era and plaques marking areas where once located structures once have their respective ties to our legacy. But it’s not all history here in Old City. This neighborhood’s present-day scene is really buzzing with restaurants, nightlife, and galleries.

Here are my suggestions for exploring Old City.

First, check out these museums and attractions.

Museum of the American Revolution
As a 2.0 American history lesson, this redbrick building goes beyond dates and facts. It’s designed to bring visitors directly into the growing conflicts that would have the 13 British colonies deciding to break away from English rule and develop a new republic. And, of course, there are many sides to the story. In a chronological format, the museum delves into not just the main characters like General George Washington, but also other individuals whose voices often may be overlooked – women, freed and enslaved African peoples, and the Native American Oneida nation. Artifacts are on view too. In particular, see Washington’s headquarters tent that’s enclosed in a glass casing – where he made crucial battlefield decisions.

The President’s House and Liberty Bell
Maybe you know this already or you don’t. Before the White House was built in and D.C. would become our nation’s capital, our country’s first two Presidents George Washington and John Adams resided in Philadelphia. While their presidential home – known now as The President’s House – is long gone, an outdoor display marks its spot where you learn about the African Americans who served Washington and his family. Adjacent to this area, take the time to view the Liberty Bell. It once was a working bell, before getting its now signature crack, and has become a symbol for civil rights. 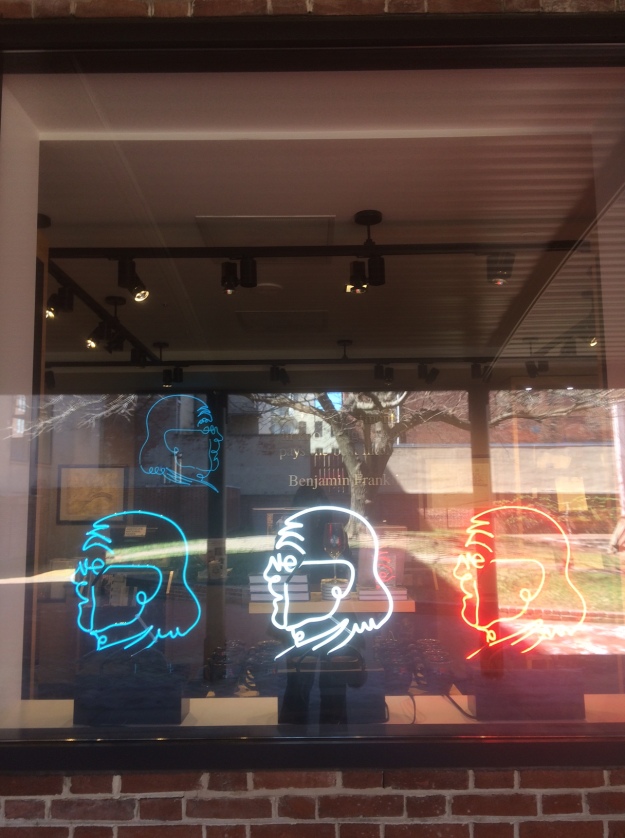 Benjamin Franklin Museum
Most of what we think of this Founding Father is from his later years in life. But he’s got his place in our history, and it’s definitely noted. With fun videos and well-described objects, this museum is based on a lower level of a building and tells overall about his life story. For example, Franklin is actually not originally from Philly, came to live here at a young age and went on to be prosperous and influential. Afterward, head to Christ Church Burial Ground, where he’s buried and find coins placed on top of his tombstone.

Now, as for dining, here we go. My picks include:

– 2nd Story Brewing: This brewery/restaurant/ bar was started by a local farmer (who still owns it) and her beer-brewing son-in-law, with bar grub that’s healthy too (as shown here).

– The Little Lion, located right across from the Museum of the American Revolution, centers on fine, Southern-inspired comfort food with brunch, lunch, and dinner selections within a casual setting.

– Zahav, an Israeli restaurant featuring small plates, tasting menus, hummus and other traditional dishes with a modern twist, and an at-the-bar happy hour specials like half-off on hummus.

– Khyber Pass Pub: This dive-looking, dark wooden interior bar with a side gastropub is touted for its Southern food and beer selection plus has vegetarian-friendly options. Some unique choices include popcorn that can suit vegans or carnivores (the latter version features bacon grease).

– Han Dynasty: The Old City location of this chain does a contemporary yet still authentic take on Sichuan cuisine. One of their best dishes is their Dan Dan Noodles, and you’re given a choice on the spice level by calling out a number.

– Fork: This sophisticated New American restaurant that’s said to have jump-started Old City’s restaurant scene about 15-20 years ago. With an elegant interior and a push for seasonal ingredients, lunch/dinner choices can feature handmade pastas and high-end starters.

– The City Tavern: Yes, it can seem touristy with the wait staff dressed in historic attire, but it provides a fun intro to what the Colonials ate and drank with choices based on authentic period recipes.

– The Franklin Fountain: An ice cream parlor bringing you back to the time of soda jerks with bow-tied waiters and quite the list of flavors.

Have you been to Old City? What do you recommend?

Have you been to Old City? What do you recommend?