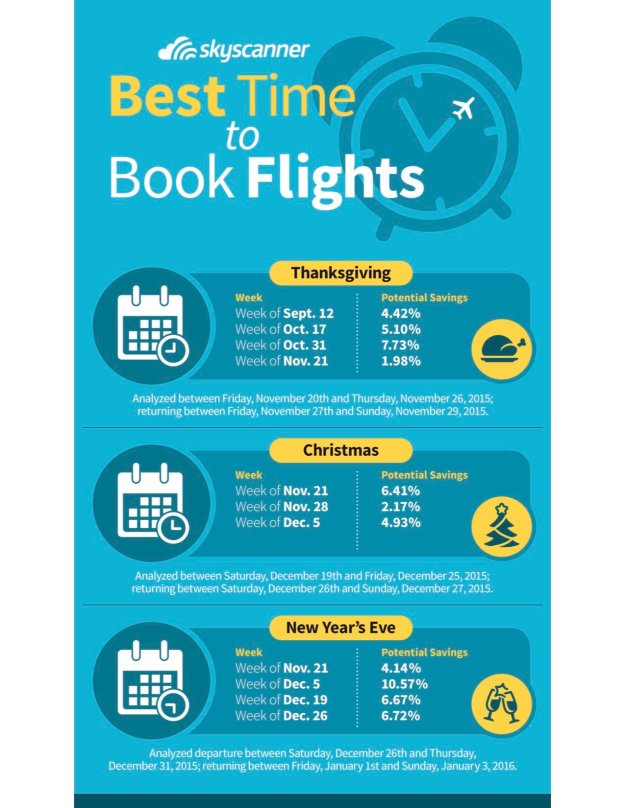 With holiday travel plans, I tend to jump on booking flights and hotels quickly (such as with a planned post-Christmas trip to Atlanta this year). Yet my method is probably not full proof. In dipping into my e-mail bag, last week I got this press release from Skyscanner about the debate over best time to book predictions for this year.

Apparently, being last minute pays off.

Based on data compiled from more than 50 million users’ booking habits during the 2015 holiday season, Skyscanner’s findings apparently show that the highest savings are available no more than four weeks prior to Thanksgiving, Christmas and New Year’s, with potential savings even available to those booking flights the very same week.

In breaking down the results, Skyscanner listed the best time to book travel for possible savings, around each of the major holidays coming up this year.

Skyscanner also did a Twitter survey, which found that 44 percent of respondents shared that their plans are made six months to one year in advance; 17 percent between three to five months out; and 39 percent said they prefer to book their travel four to six weeks ahead.

So tell me, when do you book holiday travel? Do you think Skyscanner’s study is right or not?