Since its launch in May, Citi Bike has been getting a lot of hype and use on New York City streets. This past weekend, the bicycle sharing program participated in the openhouseny series through holding tours of its headquarters in Brooklyn next to the Gowanus Expressway.

On Saturday, Citi Bike’s Office Manager Justin Salsberg led my group around this warehouse on 3rd Avenue and 52nd Street. Taking us up and down levels and through the entire facility, Salsberg showed us every aspect of Citi Bike’s operations. Pretty much, it’s a round-the-clock command center.

The upper level houses customer service representatives and dispatch operators, who both are busy 24/7. Citi Bike staffers receive about 1,500 calls daily, according to Salsberg, with inquiries often involving “how-to” questions on even, yes, how to ride a bike. Emails are another story, as Salsberg mentioned that about 350 email responses are sent per day. 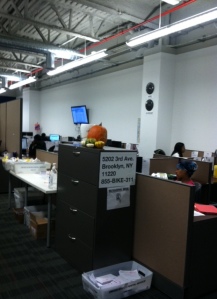 With dispatch, a logistics team monitors station needs, such as when to refill stations and tracking the rental status of 6,000 bicycles currently on the street. Staff members also interact with their colleagues at Alta Planning + Design, Citi Bike’s parent company in Portland, Oregon.

Also up in the office level, the program’s first three bicycles are on display. Aside from marking the program’s official launch, these initial bikes signify some of the challenges faced in starting off its ride.

Based at its Gowanus location for half this year, Citi Bike’s HQ originally was in the Brooklyn Navy Yard right up before Hurricane Sandy hit in late October 2012. Due to severe storm damage, with the loss of almost its entire fleet of 2,000 bicycles, Citi Bike staff then relocated and launched from Brooklyn’s Greenpoint neighborhood. Only these three bikes escaped with no severe mash-ups.

Speaking of bikes, Citi Bike’s wheels are pre-made in Montreal, with some touch-ups added on. Each Citi Bike weighs about 42 and ½ pounds, with Salsberg describing the model as “street cruiser heavy,” the weight also acts as a theft deterrent and fits in mind with the bike sharing program as being used solely to get a rider “from Point A to Point B.” Additions for the NYC bikes include LED blinking lights on the rear tire and, on the front, a protective rack that consists of a half-open side basket with bungee cords can hold in items such as a bag or a briefcase. 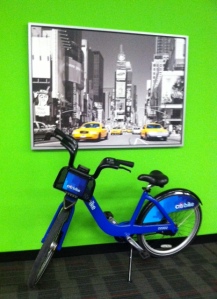 The reason why there’s no full basket is due to safety reasons, such as riders who might think of a basket as an extra seat and try to place their young children in it. It also deters any garbage from being left with the bike.

Heading back downstairs, the lower level of the warehouse is a bike storage and repair station area. A good portion of space is for bike stacking, as Citi Bikes are lined up after being repaired for reuse at various stations through Manhattan and Brooklyn. Parked vans are used for loading and delivering bikes ready to go. When asked station region was the busiest, Salsberg quickly answered Midtown, particularly around Penn Station and Grand Central Terminal. 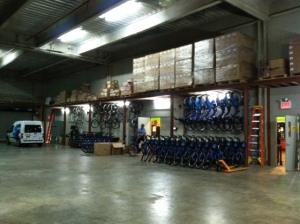 On one side, there is a repair room called Station Tech, where maintenance on station parts such as docking ports and touchscreen kiosks take place here. Literally, the room is stocked with various pieces of hardware. 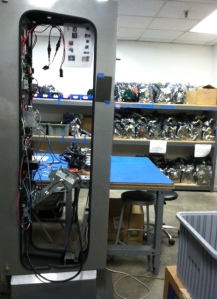 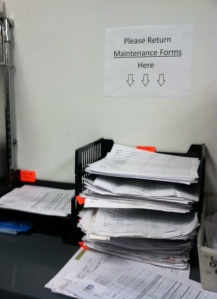 Another large space down here is a body shop where close to 20 mechanics work rotating shifts in either the morning, afternoon or evening to repair close to 10 bikes a day. Of course, tires get damaged by parts getting stuck in them, and there’s a container called Big Apple Shrapnel showcasing these bits and piece. Vandalism is the biggest repair issue, with most of it having to do with removing stickers. 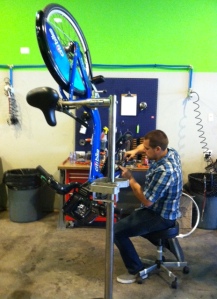 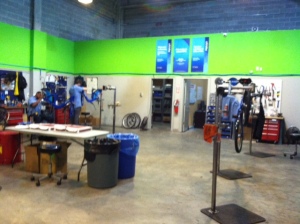 Salsberg also shared some tips and side stories. As Citi Bikes can go missing or get stolen, despite a tracking system and a hefty fee, DOT, NYPD and the general public have been helpful in calling in about spotting bikes out of their normal places. One interesting find was of a Citi Bike hanging from a tree in Harlem.

And for those riders who face a dilemma called the “biker bump”  – where a CitiBike is locked in but not correctly – Salsberg gave this answer. Lift the bike by both the front handle and back seat, and put it through in a motion that’s like you’re shoveling. It will click in.