For about two days around Iceland’s West Coast, and before heading back to Reykjavik, our group gradually made its way across Snaefellsnes peninsula, a geological mixture of everything from lava fields to off-colored sandy beaches. Exploring this rugged region makes you think you’ve landed on another planet. 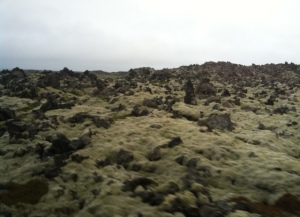 The earthy features here also extend to volcanoes, glaciers, mineral springs, and rock formations, as well as caves and bird colonies. Along this way is the Myrar district, a region of plains and bogs with small lakes.

A number of villages line this region as well. Making quick stops at some of them along the way, we got to explore Búöir, a former fishing village graced by a white sandy embankment adjacent to the Búŏavik Bay. To get to the sand, you walk through a grassy area.

Once there, you will also see lava rock, as the dark and large stones make up the Búŏahraun lava field. The area also has a bit of mysticism to it. New Age followers are said to have been coming here with the notion that this place is best for finding “good vibrations.”

We also spend some time at Arnarstapi, another village that is mainly a summer resort. There are cottages here along with a harbor and seaside cliffs, and a large stone statue that is a monument of a Pagan figure, which “looks out” for this area. 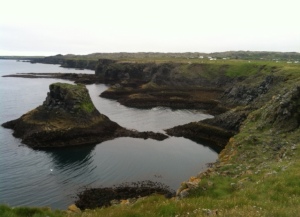 Now vacant, Dritvik bay was once home to a prominent fishing village but now is mostly seen for a valley of lava formations and gorges and pebble-covered beach called Djúpalónssandur. A reminder of Dritvik’s past, the beach has four heavy lifting stones that were used in a game of strength by fisherman.

With each stone differing in weight, they went like this:  Fullsterkur (meaning “full strength”); Hálfsterkur (“half strength”); Hálfdrættingur (“weakling”) and Amlóði (“useless”). Fishermen had to lift at least Hálfdrættingur to hip height to be eligible. The beach also holds the remains of a British trawler called the Epine, which was shipwrecked east of Dritvik in March 1948. Only five out of the 19 crew members were saved.

Also in Snaefellsnes peninsula, there are sets of waterfalls called Barnafoss and Hraunfossar, which may not be as large as other walls but you can get a good view via a walkway and climbing up and down a rocky section. A major piece in the peninsula is Snaefellsjökull Glacier, found at the very end. A beautiful site, this glacier is a stratovolcano, which means it’s a conical volcano built up by many layers of hardened lava, tephra, pumice, and volcanic ash. 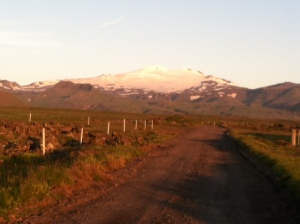 The glacier also has a footnote in literature, described in Jules Verne’s novel, “Journey to the Center of the Earth.” Yes, overall, there is much to see while driving along Snaefellsnes.