To get a “taste” of Fijian culture, hopefully you would like to try local dishes. On Fiji’s Denarau Island, the Flavours of Fiji Cooking School takes your culinary interest a bit further by having you get “hands-on” in learning more about traditional cuisine. And, of course, you get to eat what you make.

Opened this past May, Flavours of Fiji Cooking School’s focus is on teaching tourists and visitors how to cook what is called the “Fijian way.” Instructors who are also home cooks share time-honored cooking methods and stories about Fijian living inside this modern-purpose cooking facility. The school also has a gift section selling local products such as teas and spices and cookware and tableware. 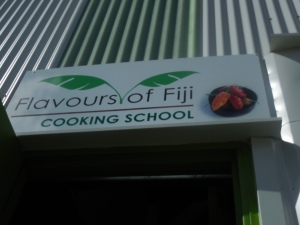 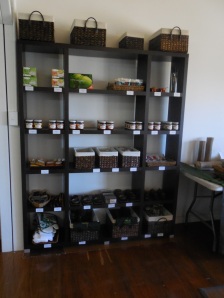 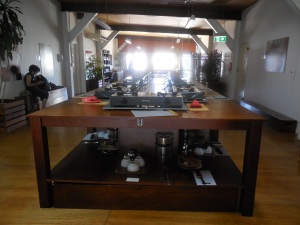 When our group arrived at the school, we were greeted with a refreshing drink: a delicious Chilled Bu (coconut) juice. And the “glasses” were coconut shells. After settling in, we were given a brief lecture about the various ingredients we would be using. 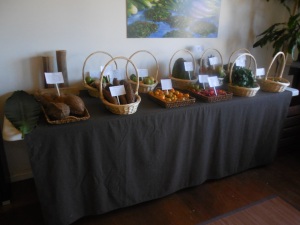 On a table across from us, an arrangement of different fruits and green and root vegetables were displayed with their Fijian names and accompanied by factual information in English. This selection of produce included:

–       Rourou, which are Taro leaves and taste like spinach 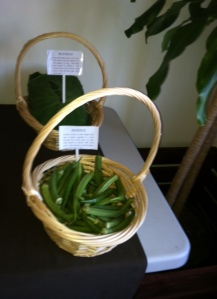 Food can also be significant in other ways. For example, villagers have used bamboo shoots as cookware for roasting root vegetables by placing them inside a shoot and then placed the shoot into a fire. Banana leaves also double for wrapping meat, chicken or fish for grilling and even can serve as placemats.

Coconut, which is Nui in Fijian, is an essential ingredient in Fijian cuisine. Our teachers described the coconut tree as “the tree of life” in that this fruit has multiples uses, from cooking its meat for food to making coconut oil for beauty needs.

We got to see how its flesh and water are extracted. First step: look for the “three lines” on a coconut that will be hit with the back of a knife to crack it in two. Then, once it’s split, each half of the coconut is scraped against a sharp edge on a tool made from the wood of a guava tree. 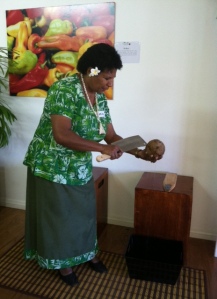 Standing near the school’s coconut scrapping stations, we watched as one of the instructors demonstrated  a method for scrapping off the meat known as a “1, 2, 3 rhythm.” You curve your hands around each side of the coconut shell, and then you move the coconut’s interior up and down again the sharp metal portion of the stick to scrap the meat off.

Our three and a half-hour cooking class centered on preparing six dishes, three Fijian and the other three, Indian. Our teachers prepped all of our ingredients beforehand, organizing and filling bowls, cups and side plates, with necessities with oil, water, and spices.

We started off with the Fijian recipes, and first sautéed rourou with onion, tomato, and garlic to create a spinach side dish. While it cooked, our teachers told us about how rourou is a food fixture in Fijian households, and for good reason. In emphasizing the importance of fruits and vegetables in the Fijian diet, they explained that elders regularly eat rourou (with the younger generation, it can be iffy) and how, as a result, they are hardly sick.

Fish was next. “Kokoda,” a raw fish salad, consists of a white fish called walu marinated in lime juice, with onion, tomato, chili, and coconut cream. Our third dish was a bit sweeter. For dessert, we made “Vudi Vakasoso,” plantains simmered in coconut milk mixed with freshly grated coconut and cane sugar.

After completing these Fijian favorites, we then set aside our pots to cool and then got ready to prepare our Indian recipes. Fiji is a multicultural society that has blended in flavors from other nationalities that have come to live on the islands; particularly Indian.

Two of the dishes in this second set were curry based. Bhindi Curry, which is okra blended with cumin seeds, mustard seeds, curry powder, onion and garlic, gave off an amazing aroma as the mixture cooked in the pot. A chicken and potato curry called Murghi and Aalu Curry also infuses poultry and potato with a blend of similar spices.

To accompany these curries, we concocted a vegetable chutney made by dicing up cucumber, tomato, onion, chili and coriander and added in a drizzle of  lemon juice. Finally, as bread is served with traditional Indian dishes, we prepared Roti, a flat bread made from wheat flour. We had two dough balls to edge out and then flattened into a circle by first your hands and second with a rolling pan. Then each is placed one at a time in a hot skillet. As the dough begins to bubble, oil is brushed on each side and then is cooked and flipped over like a pancake. 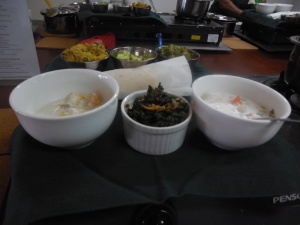 After our dishes were completed, we enjoyed eating what we made alongside plates with cut-up taro, pineapple and papaya and a freshly made juice. We also “graduated” that day. The school staff presented our group with diplomas naming each of us as a Local Master Cook. For a tasteful lesson on Fijian culture, schedule time for enrolling in a class at this school!